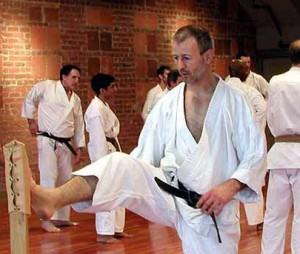 Mike began his Karate practice in 1971 during his senior year in high school with a Japanese Karate Association dojo in Johnstown, Pennsylvania.  In 1972, Mike began undergraduate studies at the University of Pittsburgh and joined the SKA dojo at Pitt.  At that time there were several blackbelts leading practices under the direction of Sadaharu Honda, captain of Waseda University Karate team (1962).  Mike benefitted from years of rigorous training with them under Mr. Honda’s watchful eye.  Mike received his Shodan (1st degree) and Nidan (2nd degree) black belt ranks from Sensei Honda.  Subsequent ranks Sandan (third degree) through Godan (5th degree)  were given by Tsutomu Ohshima, captain of Waseda University Karate team (1952) and founder of Shotokan Karate of America.

Mike led the Pitt dojo beginning in 1975 through the early 80’s. During the 80’s and mid 90’s Mike lead practices at Pitt and CMU when business travel allowed. From the late 90’s to the present,  Mike has continued to lead at Pitt.

Over the years, Mike has been fortunate to practice with and learn from many of SKA’s early and founding members, In addition, Mike is also grateful for several years of one on one practice with Caylor Adkins,  following his interests in iron ball, boxing, in close fighting, stick and bo fighting.

Professionally, Mike Duray has been a body worker since 2002. He maintains a private practice which focuses on Structural Integration, Orthopedic massage, Visceral Manipulation, Craniosacral Therapy and exploration of movement though individual Pilates instruction.